The investment institutions of MDS include well-known blockchain VCs such as Fenbushi Capital, Danhua Capital, Fundamental Labs and etc.

We gratefully thank all the community friends and MDS fans that the project could not go far without your support and trust. MDS project focuses on long-term development, and our community will always follow the principle of fairness and transparency. We biweekly release our project updates in form of the following progress journal:

Any DeFi user can buy MDS from Uniswap, then join this pool through Metamask or other Ethereum wallet. The contract will cover below DeFi contracts including MakerDAO, Compound, Uniswap, Aave, Curve.fi 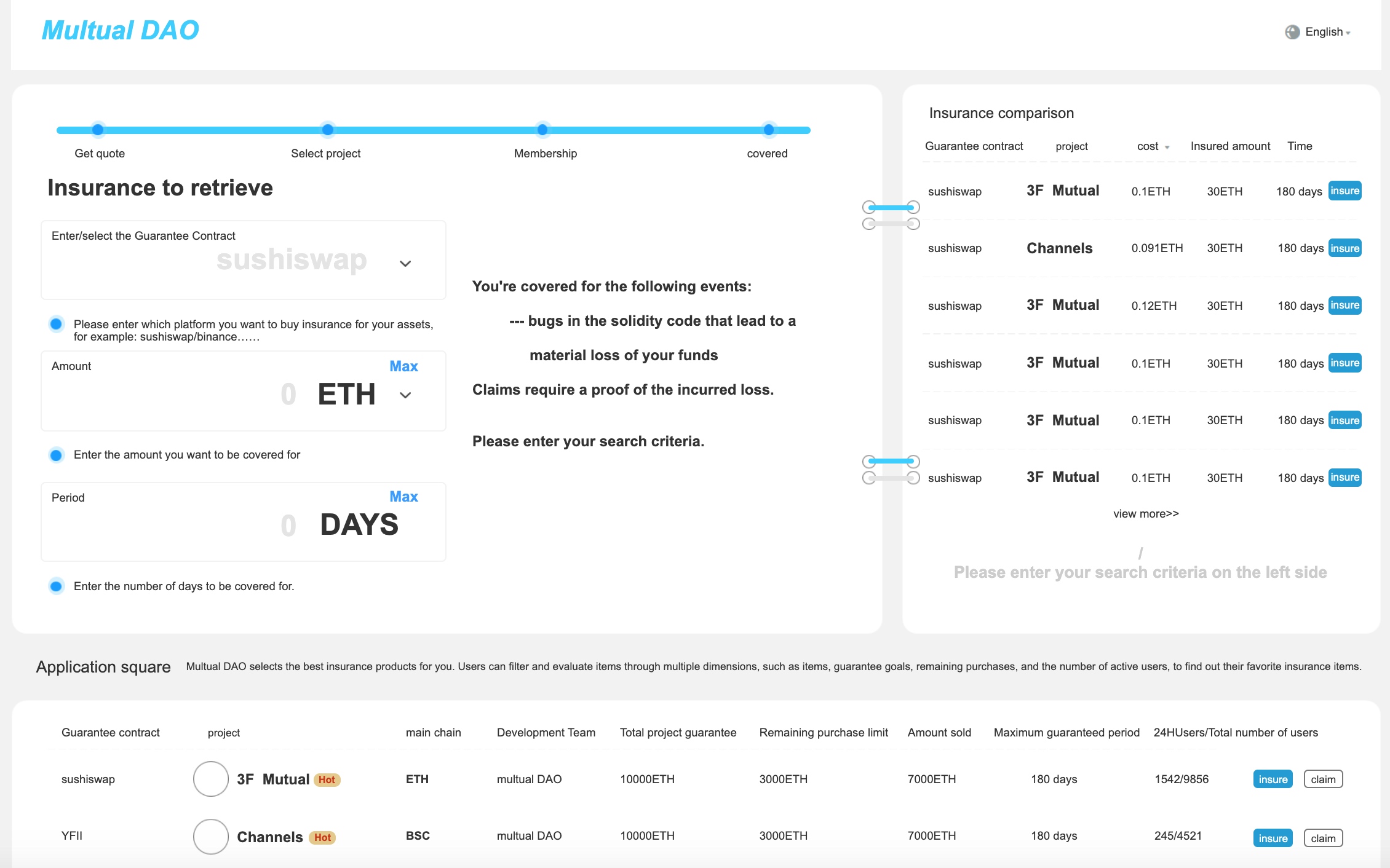 MutualDAO Market will combine price, active users, NFT and will support cross-chain (including ETH, Heco, BSC etc).
With more and more DeFi insurance protocol, user do need a insurance aggregator market that can help to choose the best protocol.

MutualDAO listed on snapshot, all MDS holder and vote the proposals there
Snapshot is a off-chain, gasless, multi-governance community polling dashboard used by many DeFi projects.

The first quarter of 2021，DeFi insurance market is super active. Tidel Finance, an alternative insurance market in Polkadot, which has just completed a million-dollar private equity financing in early March, announced that it will conduct IDO on Balancer on the 25th of this month. At the same time, Helmet, an insurance project based on Binance Smart Chain (BSC) also announced that it has acquired strategic investment from Binance, and also announced other public chain token pre-sale platform and NFT option products built through option logic. According to the previous DeFi insurance protocol, InsurAce has also announced that it has completed millions of dollars in strategic financing, and InsurAce has launched the Ethereum Rinkeby testnet.

For decentralized insurance, the key to its operation is the risk sharing mechanism. This is not a new concept that emerged from the development of the DeFi wave and the sharing economy. As early as the 1940s, John von Neumann and Oskar Morgenstern published the "Game Theory and Economic Behavior" and it created a modern theory of risk sharing. They used the idea of restructuring risk to make the expected utility value of risk taker's wealth, and successfully created the Expected Utility Theory. Since then, Arrow in 1953 and Debreu in 1959 proposed General balance analysis under uncertain conditions. Karl Borch published the Arrow‘s equilibrium theory in 1962. The general equilibrium model was introduced and promoted to analyze the problem of risk allocation under uncertain conditions, and proposed Borch's theorem on Pareto optimal risk allocation , which was successfully explained that in reality, how the risk-sharing mechanism works has made a great contribution to the theory of optimal insurance. Since then, Hans Buhlmann and other scholars have done continuous research on this concept.

With the continuous development of the social economy, based on the progress made in related theoretical research, a variety of commercial forms of decentralized insurance have gradually emerged in different national markets, thus replacing the popular online mutual assistance in the Chinese market and etc. In the next episode we will review the development of decentralized insurance in global market.